...Sondheim wrote a hell of a show in Company. The unique Sondheim harmonic structures, overlapping vocal lines, and thick orchestration do not escape this show. I have only had the privilege of designing a Sondheim show twice before (Gypsy and Into the Woods), so I was thrilled at the opportunity when I learned I was going to be designing Company as the season opener.

When I was thinking through an outline for my design process, there were a couple specific challenges to overcome and goals to meet.

First of all, the show was in the Irvine Barclay Theatre (IBT), which is a fantastic 750-seat proscenium theatre, and our usual venue for the season opening musical. However, as this venue is also its own business entity, we don't get to call the shots in the same way as we might in a UCI educational venue. We couldn't configure the equipment with as much flexibility. We had very strict hours during which we could work; being forced to leave the theatre at midnight during tech week is both a wonderful and terrible thing! And lastly, we didn't have free access to the venue until load-in, so a lot more guessing and relying on CAD drawings are necessary to put the design together before load in. 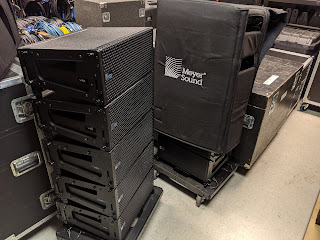 Secondly, some of my design goals caused some challenges around what gear our shop was able to supply. In a venue the size of the IBT, I wanted arrays, rather than point-source boxes, as my main system. And, being a musical theatre production, we used a left-center-right speaker position as is typical of most amplified musicals. Our main line array cabinet of choice at UCI is the Meyer M1D. We have 16 of these boxes, so I opted to use 8 per side for the L and R hangs. We were then fortunate to receive a little extra funding and rent the newer Meyer LINA system as the center hang (10 LINA cabinets).


My overarching goal of this design was to create a great sounding, reliable musical theatre system. Immersive audio and surround sound are hugely popular explorations in modern sound design, but for this show I wanted to instead focus that energy on perfecting the fundamentals. The show also did not call for a huge amount of additional sound content and effect. I added some NYC soundscapes from time to time, as well as a few incidentals where called for, but for the most part, anything more complex started to step on the score's toes.

The Barclay has a few in-house QSC KLA12 boxes per side, but given some of the restrictions mentioned above, we had much more control bringing in our own M1D arrays. Being able to rent the LINA array for the center vocal system meant that I had an amazing level of quality to work with. The groundplan, section, and array drawings show where I ended up with the system. 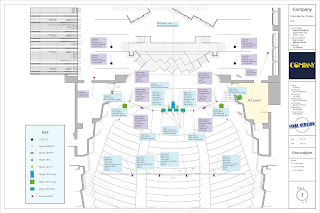 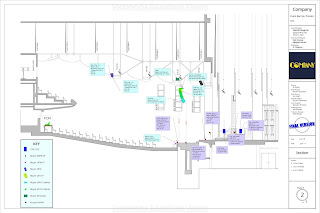 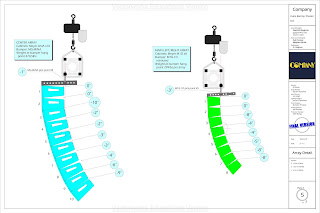 As you can see, the system also includes front fills, balcony fills, and "side fills," which were two Meyer UPJs hung immediately next to the LINA array, but focused toward the far outside sections of the orchestra level closer to the stage. This is the area the LINA didn't quite cover within a 6db tolerance. With those UPJs and the front fills (Meyer UPMs), the orchestra level had even coverage everywhere except for about 4-6 seats.

In the last year, we have also acquired a slew of new equipment to fold into our designs. The main impetus was the old and decrepit nature of our former large-format mixing console. The Avid VENUE from years past was falling apart physically, and becoming quickly outdated as an educational tool. We're now using an Allen & Heath dLive system, consisting of the dLive DM48 MixRack with S7000 surface, and several digital snakes (DX32 and DX168) for expansion. This system finally allows enough I/O to handle most modern designs without restriction. The following shot of the tech table shows the control software for the dLive system. It also shows the Allen & Heath IP8, which is an amazingly versatile fader bank that gives me control of the system in a much more intuitive way without being at the console. 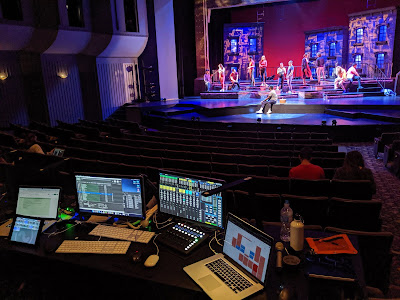 The wireless mics used on performers were the Shure UHF-R series that have been so ubiquitous in the last decade (or two...). We were able to use DPA 4061 microphone elements on all of the UR1 body packs, double miking our lead, "Bobby," since he is so rarely offstage. The fantastic A2 crew, trained by assistant sound designer Kyle Causey, was always keeping tabs on the status and performance of each mic, such that we didn't have any major incidents during the run of the show. They were using Wavetool, which is on the screen of the iPad in the previous picture. It's a software that combines the RF monitoring of Wireless Workbench with audio monitoring capabilities to let them look and listen for each microphone on a computer, iPad, or iPod Touch anywhere on the deck. This was our first show using Wavetool, and it proved to be an awesome update to the A2 workflow here! 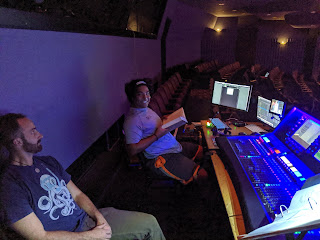 Another purchase we've made in the last two years is Waves SoundGrid. This is an external FX processing server that loops into the console via an expansion card - it allows us to add any Waves plugins to the live effects chain in the console! In this case, I was able to use Waves plugins like their DeEsser, RVerb, TrueVerb, C6, and a few others to augment the limited processing the board can do. At the far end of the FOH table picture is the monitor with control software for SoundGrid. In front of the S7000 is our mixer/A1 JJ Margolis, who was thankfully able to put up with me during this whole process! The picture was candid for JJ but less so for Amin, our QLab operator.

The orchestra was the last major piece of the [sound] puzzle, and in this case, they were located on stage, between the NYC buildings and the actor platform. Having the new digital snakes with the Allen & Heath equipment made it so much easier to integrate the orchestra into the system. Because of the orchestra's location, there was a pretty large distance from them to the audience, so amplifying them and keeping their stage sound level under control was more manageable than I anticipated. The actors had the advantage of being closer to the orchestra at all times (though we still used a full stage monitor system). And, I actually found it much easier to get a consistent orchestra/vocal blend throughout the audience since the orchestra was not immediately in front of the front row! I didn't snap any up-close pictures of the orchestra, but this might give an idea of their relation to the audience: 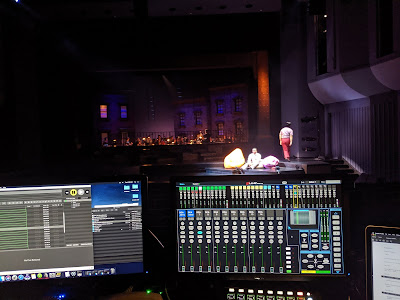 I was lucky to have mixed the season opening musical the year prior, Legally Blonde, with Jack Bueermann as designer. That show was also in the Barclay, so I was able to get a grasp on how to work best in the space and what might work best when it came around to designing Company. Because of the extra obstacles that working in the Barclay introduces, I tried to be ahead of the game in as many areas as possible. I was able to start thinking about system design options the previous Spring, and got the bulk of the drafting completed before we came back to the Fall quarter. I was met with a constant feeling that I was missing something, or something was bound to go wrong, but in the end the preparation paid off, and the team was able to get every piece of the puzzle together. I was able to enjoy working in the Barclay and felt rewarded by the success of the show.