A while back, I wrote a piece for Stage Directions Magazine about a (relatively) simple way to use an iphone to control levels of sound in QLab. The piece was published in the most recent edition, and you can read it here!
I created the solution a few years ago for a UCI production of The Laramie Project, directed by Tim Brown (MFA '11).
Posted by Vincent Olivieri at 7:36 AM No comments:

Earlier this week, the graduate sound designers took a field trip (our third and final this quarter - I think) to Ultimate Ears. UE makes high-quality in-ear monitor modules, some models of which are custom-molded to the listener’s ears. They have their main office/studio facilities here in Irvine. Josh Fehrmann, one of our MFA students, owns a pair of their modules, and he was the one to suggest that we see if we could visit their facility. I got in touch with Ryan Sandoval at UE, and he made it happen.

Upon arriving at UE, we were ushered into the demo room, where we were able to try out all of the custom in-ear models. Soon after, Philippe DePallens, GM of UE, came out to talk to us. He explained the history of UE (starting out as a mom & pop company out of Vegas), how Logitech came to acquire UE, and how UE works to build market share and brand loyalty. 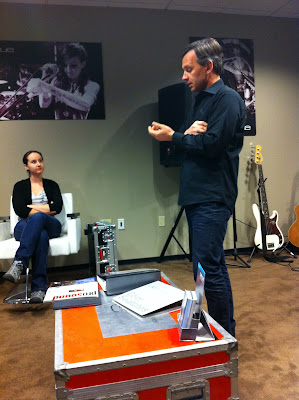 Then, we took a walk into the labratory studio, where the devices are actually built. Philippe took us through the entire construction process, starting with ear molds and moving all the way to tuning the electronics. We were blown away at the precision with which the artisans in the studio were able to assemble the tiny electronics to such consistant performance!

The visit marked a significant change in perspective for our students. Walking into the office, more than one of them scoffed at the idea of high-quality IEMs, but on the way out, they were thinking seriously about investing in a pair. I can’t say for sure that they will (the nicer models are pretty pricey for a grad student), but even if they don’t right now, who’s to say that they won’t in the future?

Thanks, Philippe and Ryan for a great visit! 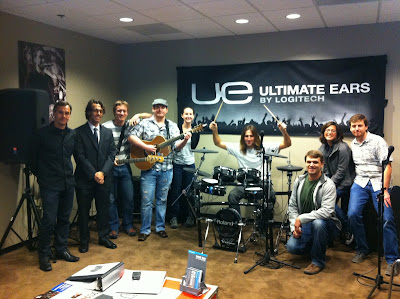 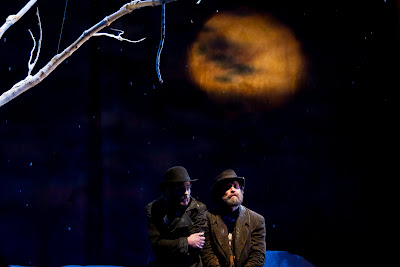 A few weeks ago, I had the opportunity to use Meyer Sound’s VRAS in my design for Waiting for Godot and my system grew into a full fledged Constellation system! Meyer Sound’s Mac Johnson, Pierre Germain, and Steve Ellison came down to help me for a tuning and voicing session! It was a unique experience, so here’s a taste of what it was like!

My design concept for UCI’s production of Waiting for Godot started with the fact that it was set in the dead of winter with snow actively falling throughout the show. The scenic design enveloped the audience with telephone poles cradling either side of the seating and actors entering and exiting on a snowy road through the middle of the house. I wanted my sound design to be as equally immersive. Having spent a few winters in Chicago and the middle of Pennsylvania, I was very drawn to the idea of replicating the stillness, the quiet sound and feeling of freshly fallen snow. I was also lucky enough to have resources in the show budget to buy materials to help me achieve the dead sounding room I wanted. Reverb provides a crucial sense of how big a space is and is an aural key as to where you are in space. For this show, I wanted to create as few reflections as possible and I REALLY did have a challenge; the Robert Cohen theatre is essentially a 50’ x 50’ x 20’ concrete box. I went through various ideas of how to achieve maximum absorption such as using bass traps in the corners of the theatre and foam under the seating, but settled on using a combination of velour curtains on all four walls hung with maximum fullness and carpet covering as much bare floor as possible. Below is a groundplan of what I ended up with, showing the set with the carpet and curtains. 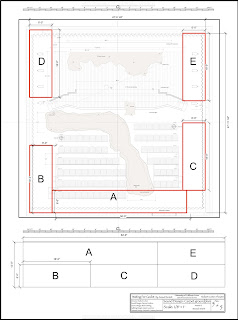 In contrast to this very still environment, the second act of the play takes place in spring. With the change in season I also wanted an aural shift. How to achieve this without tearing out all the carpet and curtains?! With Meyer Sound’s VRAS (Variable Room Acoustic System) of course! I used the dampened space to my advantage to create a variety of unrealistically large environments with VRAS that were incongruous with the actual size of the theatre. These moments were meant to both delicately foreshadow events and place aural weight on highly unrealistic situations. I also wanted to use it subtly to bring back the bright vocal quality of a spring day.

Major sound design and VRAS moments included the falling of night / moon rising in both acts and Lucky’s speech. Night falling followed the boy’s entrance, which I made highly abstract and dream-like using a very unrealistic reverb with multiple reflections. This VRAS continued through the night to keep the actors in a spell where there is little certainty of what is real or not. Lucky’s speech is the only time in the play where the character talks and he ends up having a mental breakdown. This scene had a similar effect in which VRAS signified where the breaking point was and, in addition to this large soundscape, I created all of his past experiences rushing back in the shape of a nightmare that engulfs the audience in sound.

Because I knew early in the design process that I wanted to use VRAS, I tried to do as much research as I could on past Meyer designed Constellation systems. I found a few examples online and noticed that they mostly consisted of Stella, MM4, UP-4XP, and UMS-1P speakers. The microphones were in rows with parallel rows of Stellas or MM4s on either side, all equal distances apart. With this information, I created a draft of my VRAS system using eight Stellas, six MM4s, and two UP4s (to be used half for VRAS and half for effects playback). I also emailed Mac Johnson (Meyer’s Constellation Project Manager) for advice, whom I had met earlier in the year for SIM3 class. When I heard back, he gave me suggestions about moving the placement of a few speakers and also offered to have Meyer come tune my VRAS system! Uh what? Yes please! We had used VRAS before in shows here at UCI, but could never really get an optimum performance from it because a lot of the information regarding it is proprietary so I was very glad to accept the assistance.

After much planning and a lot of paperwork, I began to e-mail a lot of documents to Pierre Germain at Meyer Sound who was going to be doing the actual tuning. He wanted a system config LCS project file, groundplan, section, and a spreadsheet of XYZ coordinates of the speakers and microphones in the space in order to calculate delay times.

Later in the process, he wanted to know the bus assignments in my matrix. He specifically wanted one per output. “No problem!” I thought, “Of course!” And I sent him my bus assignments. The day before Pierre flew in for the voicing session (to do the heavy lifting on tuning my system), I received an email asking if the busses I specified for VRAS speakers is where I wanted VRAS to be routed? Er, what? Of course! What else? I mean it’s LCS, how do you want to do it? Confused, I carried on and it wasn’t until tech that I understood what he meant… along with a lot of other things. When Stephen (my programmer) and I sat down to put audio through my Stellas and MM4s (the busses specifically for VRAS), we found the problem: I couldn’t have my sound effects be all VRAS-ed up when I didn’t want them to! So we re-did the bus assignments for VRAS and left the ones I had set up with Pierre for sound effects use. Doh! 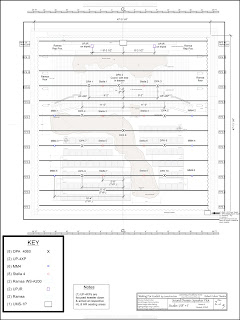 This document shows my speaker plot for the show. One thing I would have done differently is to move the two Stellas over the stage to the back of the house. Under the initial advice of Meyer, I left them in the configuration shown. However, when we got into the space for the voicing session with Steve Ellison, it was confirmed that it would have been best for them to have shifted to the back of the house. I did not miss having them in the back during VRAS effects, but I definitely did for playback. I found myself constantly using a matrix we created for just the back Stellas and pumping a lot of audio in there because I missed having a grounding aural presence from the rear. I would have also added two more UP-4XPs in the rear corners of the house. This was also my first time making a SpaceMap and I had one cue where a storm circled the perimeter of the space. I found that the transition from one side of the house to the other was weak and two more UP-4XPs would have been ideal to help the storm’s movement.

Overall, this was an extremely positive experience; we all had the opportunity to listen and learn a lot firsthand about VRAS during the voicing session. I am extremely grateful to Meyer Sound, Mac Johnson, Pierre Germain, and Steve Ellison for all of their support!

Posted by Patricia Cardona at 7:49 PM No comments:

Last night was the grand opening of the Contemporary Arts Center here at UCI. The CAC (or 'cack,' as it's now affectionately known) houses lots of new lab space, including The Meyer Sound Design Studio, the home of the Sound Design program here at UCI. It's a beautiful space (you can see photos in earlier posts on this blog), and we were lucky to have some folks from Meyer down to join us for the celebration.
We'll post pretty photos here soon, but as a teaser, here's a shot of Todd Meier, a Digital Products Manager at Meyer Sound AND a 1992 alumnus of UCI. He was part of the Meyer delegation, and we were delighted to have them down. Here's Todd with Patricia Cardona MFA2, talking to Beth Lake MFA3 (off camera) yesterday afternoon. 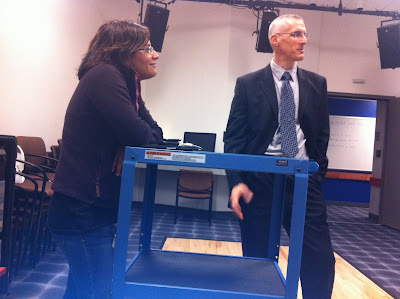 And Jodi Hughes and Todd Meier in front of the dedication plaque... 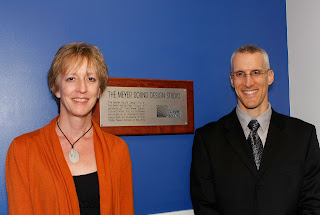 fresh pics of the Meyer Studio

Today I shot some wide-angle photos of the Meyer Studio complex. The architectural lighting is terrible throughout, but the pics came out fairly good despite this 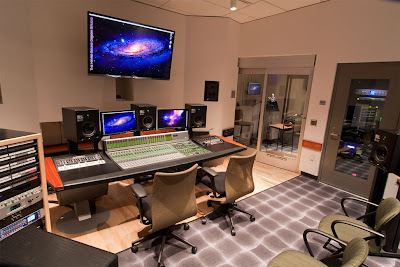 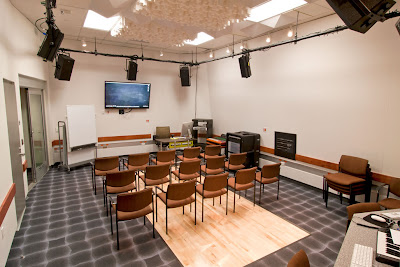 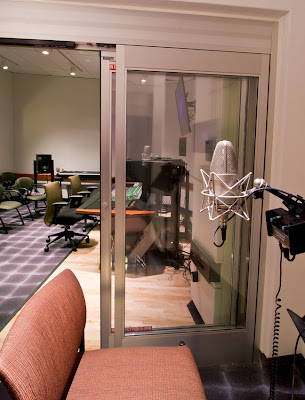 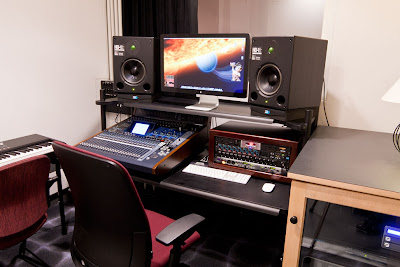 Edit Suite
Posted by Mike Hooker at 1:15 AM No comments: