Sometimes you're in tech when you really just want to be on the French Riviera.

Click this link. Resize your browser window. Smile!  That is all.
Posted by Stephen at 12:23 AM 1 comment:

At the end of March we had the honor of hosting a seminar taught by Tony Meola, with additional instruction and technical support from Meyer Sound's Steve Bush, Richard Bugg and Gavin Canaan. The seminar focused on advanced techniques for musical mixing and designing systems for musicals. We hosted the course in the Claire Trevor theatre, a 285-seat proscenium space on the UCI campus, and used the Claire's rep speaker system as our primary source.


The Claire rep system includes two 8-cabinet M1D arrays framing the proscenium, as well as an arrayed pair of UPQ-1Ps as a center cluster. In addition, we added three UPM-1Ps in the catwalk to use as delay fills and six MM-4XPs for front fills. SIM3 served as our analysis platform, and we kept a few UP-Juniors, UPJ-1Ps, and UP-4XPs as backups for playback or if we wanted to integrate them into our system. Meyer's D-Mitri system, in combination with a 32- and a 16-fader Cue Console, served as the primary mixing console and matrix. UCI's Galileo 616s and 408s were used for loudspeaker processing.

Day 1 of the seminar was spent listening to and tuning this system. Tony's techniques brought a fresh perspective on the tuning workflow, and it was a good reminder that everyone has a slightly different approach when it comes to tuning a complex system. In a couple of instances, it was necessary to reconfigure the patching between the system and SIM so that SIM could compare the microphone feeds with an appropriate junction in this signal chain. It was a fascinating process to participate in.

Day 2 was focused primarily on mixing. As mixing material, Tony was kind enough to procure a stemmed version of the original cast recording of "Defying Gravity" from Stephen Schwartz. We split up into groups of two, one person mixing vocals and the other mixing the orchestra. Afterward, Tony would give us notes we we'd get another go. After a quick lunch break, we resumed our mixing—but this time, we were going solo (with a little help from Tony). Again, we'd receive notes, but this time the notes came from our peers.

It was a tremendous opportunity for all involved. Our reactions were so personal that we thought it would be fitting for each of us to write about our individual experiences:

Mixing “Defying Gravity” with Tony critiquing us was such a rush, even if it may not look like it from the photos—apparently when we are both panicked it translates into blank expressions but I promise it was terrifyingly fun. It was an interesting experience mixing a song with another person and it was an excellent lesson in making sure to not only critically listen to how I was mixing but how my mix consequently affected Stephen’s mix, and how we could work better together. 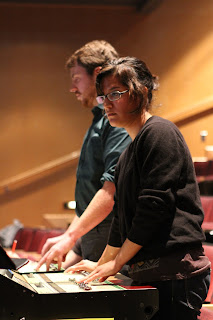 I also had fun during our load-in day, Richard taught me how to update the firmware on the D-Mitri and get it configured for the seminar. I also learned how to network the CueConsole modules into the D-Mitri frames and Richard taught me lots of useful features of CueStation 5.5.1 while we were setting up.  I could have easily spent the whole day with him learning more about good practices and tips/tricks to use when using D-Mitri in a live setting, since most of our experiences using D-Mitri at UCI have been primarily for playback. All of the different aspects this class touched on from SIM3 to D-Mitri to mixing a song with Tony actually mixing alongside you was an amazing, humbling experience that I will never forget.

This was such a unique experience for me and my colleagues.  It's not every day that you attend a seminar put together by a world-class sound designer and a supported by a world-class sound company.   Tony generously shared a sizable chunk of his creative and technical process, inviting us to dig deeper into our personal connection to the musical and technical aspects of mixing on a Broadway level.  These few days were a great blend of intensity and fun.  I appreciated Tony taking time out of his New York schedule and the Meyer Sound team for supporting us so heavily as they often do.


I am so thankful for such an amazing opportunity. The seminar was fantastic. It was unlike any we have had here at UCI. We learned an incredible amount in the three days with Tony and Meyer Sound.  Tony spoke about the importance of collaboration in theatre. That collaboration was apparent in the way he worked with us. It was a thrill to watch Tony optimize a Broadway size system from the ground up. Working with Steve Bush, Richard Bugg, and Gavin Canaan from Meyer was icing on the cake. I mastered some new Galileo tips and tricks thanks to Steve Bush. (hint: modifier keys).  I am especially appreciative of Steve Bush’s uncanny ability to explain the science of sound in a way that just makes sense. The seminar was amazing and I am so thankful for Tony, Meyer Sound, Steve, Richard, Gavin, Mike, Vinnie, and B.C for providing us with this amazing opportunity. Thank you all.

This seminar was thrilling, not only to practice under the eyes and ears of Tony but also to learn from and problem solve with Steve, Richard, and Gavin. It was humbling to experience the musical connection that a mixer has to the performance. I come from a music performance and studio engineering background, and to hear the console referred to as a kind of "instrument" is very vindicating. And I must mention the valuable tricks that I picked up regarding SIM—our mid-seminar reconfiguration of SIM/D-Mitri was a quite helpful.

Very rarely has mixing been such a directly collaborative effort for me. Of course the mixer is constantly collaborating with the performers, but I have never had a chance to play "mixer four-hands". It was an awesome lesson, not only in critical listening but in subtle psychology—gestures that I would make would affect Josh's arc and vice-versa. I have an increased amount of respect for those who can master that dance.

I have to thank Tony, Steve, Richard, and Gavin for trusting us enough (artistically and technically) to say to us "here ya go...show us what you've got". Tony: the ability to mix the tracks from Wicked was emotionally thrilling, and your guidance has refocused the way I think about dynamics in music for theater. Team Meyer: every time you let me sit in the hot seat with one of your systems I come out a better listener and designer.

It's the best way to learn, and you all rock at teaching it!


Having Tony Meola come to UCI was an amazing experience. The insight he was able to give on mixing, and his method of thinking about sound was really interesting, and gave us a new perspective. The amount of experience and detail of descriptions was intense, like for example the difficulty of hiding lavalieres in film grade wigs versus theater grade wigs. Being able to mix wicked, even for an empty stage, was definitely the highlight for me, and getting critiqued by my peers and Tony Meola was pretty exciting too! I’m glad UCI was able to make this sort of thing available for students here.

My recent experience with Tony Meola and the crew from Meyer sound was a graduate student sound designers dream. Ever since Wicked came out I was stunned by the quality of the sound design. I have seen the musical twice during its first run in Chicago and we had the CD.  My whole family loved the musical! As a high schooler I dreamed of mixing that show or a show of similar quality and musicality. To hear the individual tracks of Wicked was stunning. To hear individual tracks of Idina Menzel and Kristin Chenoweth singing and to be able to mix the show while being given guidance was the finest example of a master class that I could imagine.  A master class with Tony was a fantasy come true for me as well all the other graduate sound designers and I believe even for the sound design faculty. It was also a great learning experience to watch the way Tony tuned our space and the Meyer specialists work their systems and handle gear. There was a great deal of very useful shared verbal information that will clearly shape the way I approach my work in the future.

Although it’s been a few weeks since the seminar happened, I still find myself back in the moment: in the hot seat, performing on the CueConsole mixer.  Mixing is such a thrill; shaping a piece is such an intimate connection to music, very akin to playing a musical instrument live.  I never had imagined myself mixing a Broadway cast recording in front of a renowned sound designer like Tony Meloa, and it was a wonderfully humbling unique experience.  It reaffirmed, yet again, why I had applied to grad school.  Three years ago I didn’t really know what to expect; I had hoped I would be part of a group that is curious, experiments, shares knowledge, and tackles interesting projects together.  These seminars—that Meyer Sound so generously makes available—are times when I think we’re pushed to our best working together.


I’d like to thank Mike, Vinnie, BC, Helen, Steve, Gavin, Richard, and of course Tony for making this mixing seminar possible.  From the insight into Tony’s philosophical approach to sound design, to the rush I felt when Patricia & I hit our collective groove mixing Defying Gravity together... these moments will be forever inspiring. –Stephen

WHOOOOOOOHOOOOOO!!!! OFFLINE BOUNCE! CAN I GET A "HALLELUJAH!"?

I'm now super looking forward to switching back to Pro Tools in a few years when this feature will be stable.  ~Stephen
Posted by Stephen at 10:48 AM No comments: