Push The Button, one of my projects (this one with Davin Huston (of Purdue U.) and Brad Berridge (of Williams College)) has a piece of sound art in this year's SoundWalk, a sound-art-festival in Long Beach, CA. Huston, Berridge, and I are going to install a piece called City Park, which had its premiere at the Prague Quadrennial in June.

I'm sure that ALL of the sound designers at UCI are looking forward to the event!

There's a bunch of great artists participating this year, and FLOOD, the organizers, made this promo video. Check it out!

Posted by Vincent Olivieri at 5:41 PM No comments:

The UK Association of Sound Designers

Our peers across the pond have just created a brilliant collective. The Association of Sound Designers is a new professional association that represents the combined interests of sound designers - professional and student - from across the UK.

It's not a union and not the technical standards police... rather it looks like a group of people who care and wish to connect. I wish them the best of luck... and I hope something like this will brew soon in our great land, too.

Cheers to all of you in the UK!
Posted by Mike Hooker at 4:44 PM No comments:

I'm wrapping up a week-and-a-half residency in Hartford CT, where I've been working on TheaterWorks's production of Theresa Rebeck's The Understudy. The play is a terrific piece about a put-in rehearsal for an understudy on a Broadway production of a long lost Kafka play. The piece takes place in real time, and there are only three characters (the understudy, the stage manager, and the movie star). Theresa Rebeck is a talented writer (I've designed the premiere of a couple of her shows), and I find her work to be smart, slick, and terrifically funny. This play is certainly all of those things.

As the understudy rehearsal progresses, the characters move back and forth between rehearsing scenes from the Kafka play and conversations about the play (and each other - there's no shortage of interpersonal drama). As we move in and out of the scenes, there are lighting and sound cues to help guide us. Additionally, there is a fourth character, an unseen woman named Laura who controls lights, sound, and deck automation. She's having a bad day and can't seem to keep up with what scene she should be in. As such, she is continually triggering the wrong cues, leaving the actors to rehearse out of order, on incomplete sets, etc.

The biggest challenge of the play for me was to use the 'sound design' of the Kafka play to help support Rebeck's play. When we play a sound cue, it needs to not only fit the world of Kafka (which can be indelicately summarized as dark and brooding), but it also needs to fit this quirky comedy that Rebeck wrote. The design, in effect, needs to be both dark, brooding, and comedic.

I approached this challenge in a few ways. The first was to seek out music for the design that was 'Kafka' in tone but 'Rebeck' in rhythm. For example, one big sound moment features a huge string orchestra piece. The orchestra plays a four-phrase piece, and each phrase has a pregnant pause between it. The music itself is dark and huge, but the gaps between the gesture allow the actors to try to speak over the music. Each time a music gesture ends, the characters start talking. Then, they get interrupted by another music gesture. We create the idea that the characters are trying their best to work, but are overwhelmed by the unstoppable machinery of the technology.

Another way we addressed this challenge was to give the automation a personality. Much of the automation of the 'Kafka' play is actually executed manually by the theater staff, and on the first day of tech rehearsals, we discovered that the manual machinery was actually too quiet. There's something about the sound of automated machinery (a low drone/hum) that helps to underscore the ceaselessness of the world, so on the first day of tech, we decided to try adding in a bit of automation hum whenever the machinery moved. It worked really well - the machinery ended up having a more threatening personality, which worked really well in the play. As the play progressed, the sound of the machinery increases slightly, to underscore the characters' exasperation with Laura and her poor performance.

(as a side note, I should point out that the machinery sound idea wasn't mine - it initially came from the set designer, Luke Hegel-Cantarella, who heads the scenic design program here at UCI. Go go go collaboration!)

There were a couple of other interesting details of this production that I enjoyed. There's a section where the stage manager goes backstage and talks to the cast over a voice-of-god mic. The woman playing the stage manager is a trained singer with a lot of microphone experience, but we asked her to act as if she had very poor experience. She moved towards and far from the mic, making her volume fluctuate. She sighed deeply into the mic, causing a 'whoosh' of air to rush over the diaphragm, which sounds nasty. On the technical end, I boosted her low end (har har har) to make her sound more boomy, and I kept her volume pretty loud to be a bit overwhelming. It made for a great moment in the play.

If you're in Hartford, check this play out! It runs until mid-September.

Last night, after the Sunday preview, I drove down to New London and the O'Neill Festival to see a friend, fellow sound designer Brad Berridge. Brad is currently in residence at the O'Neill for their Cabaret Series, and last night he mixed an incredible event featuring a number of stunning performers: Joel Silberman, Euan Morton, Allan Harris, Amanda McBroom, Andre DeShields, Gretchen Reinhagen, and Lillian Montevecchi. As any of our students will gladly tell you, I am not a huge music theatre fan, but this was a truly special night. All of the performances were terrific (Amanda McBroom's 'Baby' was a stunner, Euan Morton's Whitney Houston cover brought the house down and Joel Silberman's musicianship was masterful), but for me, the highlight was Andre DeShields. That. Man. Can. Sing.

(watch that last clip about 2 minutes in - The Viper's been in my head all day long)
Posted by Vincent Olivieri at 8:49 PM No comments:

Some progress pics of the new studio. Nothing is wired up yet but it's starting to look like a studio... 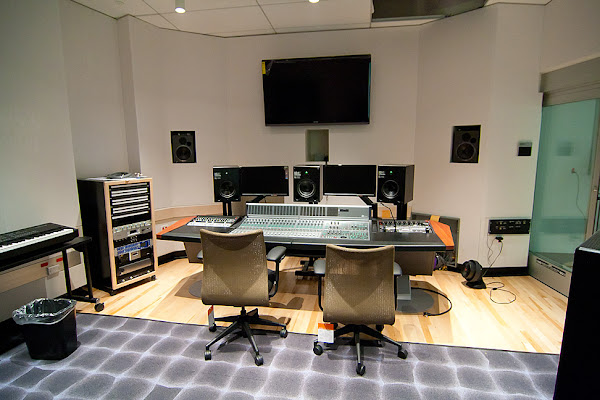 And the edit suite... 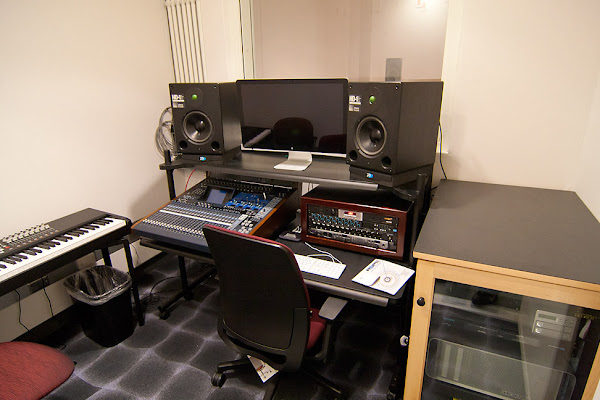 Posted by Mike Hooker at 4:20 PM No comments:

The wiring installer is now 2 months past the June 1 completion date -- but -- cables are actually being terminated and dressed (some of them, at least). 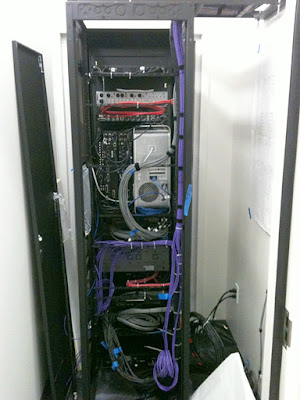 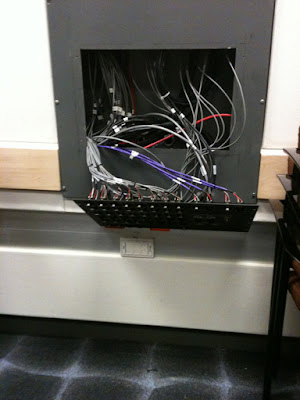