Hey folks,
A couple short videos from the folks at T.E.D. on sound:
Four Ways that Sound affects us
and
Shh! Sound health in 8 steps

Some interesting things to think about that might help you somewhere down the road.

(here are the links, in case the embedded ones above don't work)
http://www.ted.com/talks/julian_treasure_the_4_ways_sound_affects_us.html

http://www.ted.com/talks/julian_treasure_shh_sound_health_in_8_steps.html
Posted by BC at 11:48 AM No comments:

(crossposted from my personal blog)

(I don't usually post twice in one day, but this is a bit of a big deal.)
It's tough to fake a mobile phone on stage.
In the old days of wired phones, there were some great options. Tele-Q boxes worked well, as did specials/recordings and hiding bells in secret places. Mobile phones, on the other hand, are much trickier. The tele-q option doesn't work, because there is no base station. Hiding specials doesn't work very well either, because people carry their phones with them, making the sourcing very tough. Plus, if you want get picky, the sound of a phone ringing varies dramatically as you pull the phone out of your pocket, purse, etc. That's a complex change that is tough to replicate.
I'm happy to announce that a friend (and former student) of mine has written an iPhone/iPad/iPod app called PropPhone that lets you use one iDevice to control the play/pause of audio on another iDevice. You can use the 'controller' device to send those triggers to the 'prop' device, and as you do it, the 'prop' device will change screen images to replicate an incoming phone.

Not only can you use it for phone rings, but if you attach it to a battery-powered loudspeaker, you have a very cheap wireless special (not including the cost of the iDevice, of course).
Here are some other things to note:
This is a great thing for our industry - something that we've been trying to solve for a long long time. I'm looking forward to using it soon in production! $2.99 well-spent!
Posted by Vincent Olivieri at 4:11 PM No comments:

Yesterday, I spent much of the day at an un-named art museum in LA, recording sound for The Whole World Blind, a sound-art piece I'm working on with Roxanne Varzi, an anthropologist here at UCI. The piece is about removing the visual stimulation of war photography. Instead of viewing a photograph and hearing a curator talk about it, we've removed the photograph entirely. Instead, the audience will be blindfolded and just hear the curation. No visuals - only audio.
Of course, this creates a great opportunity for sound design, but neither Roxanne nor I wanted to get super heavy-handed. Instead, we're taking a fairly restrained approach. For each of the ten photographs the curator describes, we've created a design that uses the sounds typical to a museum to create a psychologically-underscoring design. Maybe a cellphone interrupts the curator's speech about focus. Footsteps on an outdoor path echo the cobblestones in another photograph. Nothing big and dramatic, but lots of small elements designed to support the images (which we never see).
To make these recordings, we set up a binaural microphone system at the museum and staged the events of each photograph individually. A number of current and former students (including first-year sound designer Matt Glenn and second-year sound designer Stephen Swift) came out to help us with the session. Each scene was precisely planned out, with performers walking, dialing, photographing, talking, sniffling, coughing, etc. all on cue. Here's a shot of me talking everyone through the staging of the next scene. 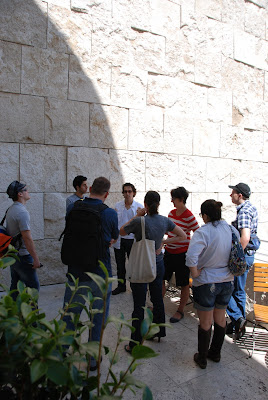 Towards the end of the day, Roxanne and I sit down to talk through the last few scenes. Matt hangs out nearby, with his bag of shoes just out of camera shot. 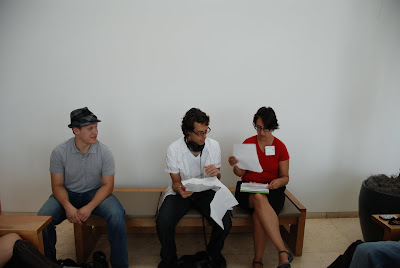 The Whole World Blind will premiere at SoundWalk on 1 October 2011. If you're in the socal area, come check it out. It will also be presented in Berlin in mid-December.
Posted by Vincent Olivieri at 10:05 AM No comments:

After a long series of discussions between Local-1, USA 829 and the Broadway League, an agreement has just been reached where 829 is now officially recognized as the sound design representative on Broadway. Having recently been through a Broadway show without representation by my union (as has Vinnie, too) I can tell you that this is long overdue. The next steps involve creating and ratifying a contract in writing. We are one huge step closer!

-Mike
Posted by Mike Hooker at 4:31 PM No comments:

how hummingbirds got their name

Given that I am dive-bombed weekly when changing the feeder in my yard, I am thoroughly convinced that hummingbirds are the most bad-ass bird, ounce-for-ounce, on the planet. It now turns out that they also have a sound design skill using their tail feathers as reeds. Apparently their name comes from this skill and not the humming of their wings. Check this out:
http://www.youtube.com/watch?v=MPaVjhUsdAw&feature=player_embedded
Maybe it's a tiny avian crush that I experience each week and not a death threat!
-Mike
Posted by Mike Hooker at 4:22 PM No comments:

Email ThisBlogThis!Share to TwitterShare to FacebookShare to Pinterest
Labels: hummingbirds

I am currently assisting on a show at the Geffen Playhouse which opens tomorrow night. It's an awesome show with a great design team, and a fantastic cast! If you get a chance, I highly recommend seeing it!

Here is a link!

Here is a link to an article in ProSoundWeb that I thought interesting, and some real good, basic advice.

But the details are what makes it a good article. Go read for yourself!