I’ve been following MiniDSP for the last year or so.  They specialize in low-priced, programmable DSP modules – primarily for tuning home stereos and building custom active loudspeakers.  My introduction to them was by purchasing a MiniDSP 2x4, which is reminds me of a $100 miniature Meyer Galileo but with unbalanced I/O and DC power.  You choose routing, delay, filtering and parametric EQ on every in and out.  It’s a great little box (I’ll try and write about it later).

But what really caught my attention is a new MiniDSP product called the UMIK-1. It’s advertised as a omnidirectional measurement microphone but with a built-in preamp and D/A. It connects via USB and is recognized as a class-compliant (driverless) audio interface. Even more tantalizing is the price at $75 list.  The thought of being able to do transfer function (TF) measurements with nothing more than a laptop and a mic was also really appealing (that would require using the headphone jack on the computer – but for backpack studio junkies it’s really tempting).  When the mic arrived, let’s just say I was really excited!

The UMIK-1 comes with a substantial kit: microphone, windscreen, mic clamp, large-thread mic stand adaptor, miniature tripod, USB cable and a padded plastic box.  This is quite generous for a mic of any price. The mic itself is all metal, feels solid, and is about the same size as most P48 measurement mics (like the Earthworks M30).  You can look up your mic’s serial number on the MiniDSP website and download a custom correction file for trimming up the response in your measurement program.  I retrieved that file with no issues. 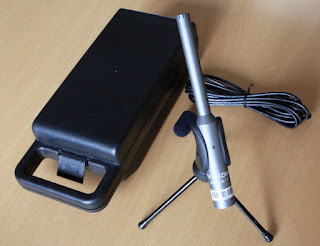 The flattest mic in our arsenal is the DPA4007.  It’s standard for the Meyer SIM-3 system: with ruler-flat response and minimal phase shift. Measurement dorks come to fisticuffs when discussing the best mic – but the 4007 is my gold standard – and I chose it as the reference to do a standard mic comparison TF measurement against the UMIK.  SMAART v.7.5 and a Focusrite Scarlett 2i4 completed the test rig. 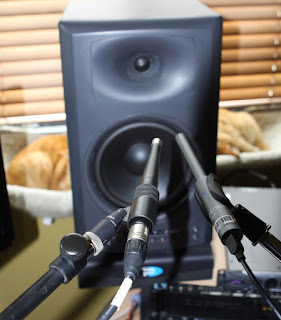 Here is the mic compare setup.  Measurement police kitties hard at work in the background.

For a source, I used a single JBL LSR4328P studio monitor. For a mic compare test, the only thing that matters is how broadband the speaker is, but it’s not a bad monitor (technically, it’s -10 down at 35 Hz and 25 KHz).  I fed it pink noise, launched SMAART and I was off to the race. The UMIK is in one USB port and the Focusrite in the other - and both are set to 48K.

Then came a big letdown.
The TF phase trace showed the UMIK sitting 180-degrees away from the DPA.  I know my workflow with SMAART and the Focusrite/DPA combo is absolute-polarity correct.  I then took a look at the UMIK impulse response (IR) trace and the spike went downward.  The UMIK is polarity reversed! With a regular analog XLR mic, this is only moderately egregious since one simple adaptor fixes it. But how do you un-flip the polarity on a USB plug? This is inexcusably bad engineering  – especially for a measurement mic.  Fortunately, polarity won’t affect single frequency response TF measurements – but the phase trace will always sit 180-degrees off across the whole band. So I set my OCD aside and continue.

Three bad thoughts.
I won’t call the next anomaly another big letdown – mostly because it was pilot-error – but it stumped me for an hour.  As soon as I started the mic compare, I let SMAART add in the appropriate delay compensation on the reference source. The phase trace snapped to 180 (this would be zero if the damn polarity was right – but it was a nearly straight) and the coherence cleared up to >95%.  But then the phase trace slowly started to unwind!  And the coherence trace started dripping red blood all over the screen – starting in the HF and slowly cutting across the band.  I didn’t panic because I’ve seen this before.  When a rigged loudspeaker is slowly swinging you can see the same phenomena happen.  But how could my tiny home studio be collapsing?  The delay time was slowly slipping about 0.1ms of delay for each second of clock time. That would mean my monitor was sliding back 1.5” every second!

Of course, the monitor stayed put. So my second bad thought was that there must be some stupid DSP problem in the mic that is adding delay. (To me that's plausible, given that someone designed it with wrong polarity).  So I engaged the delay tracking option in SMAART.  Sure enough, it was able to compensate, and I watched with fascination as the delay time started a slow countdown.

Watch this video.  The first half is with no tracking – and you can see the phase trace slowly unwind as the bad coherence start to slide left.  The second half is with the delay tracking engaged and you will see the offset grow.  Sexy time!  You can download a high-res version here.

Then came the third bad thought – which was that I was just a presumptive idiot There is an inherent problem having two uncorrelated (no digital sync) digital input devices connected to the same program.  SMAART can handle as many simultaneous interfaces as you can plug into the computer – but (rightfully so) it has no method of sample-rate or sync correction.  So… how in the world can you sync two digital sources without word clock? But then I remember a stupid Avid product that never had any practical use to me... until now.  Every time you install ProTools, a rather obscure audio engine choice called “Pro Tools Aggregate I/O” shows up in your control panel.  This driver allows you to consolidate multiple interfaces into a single virtual device, which is required for ProTools 90’s-vintage input limitations. What I remembered about the aggregate device is that you can access a hidden layer that provides “drift” correction for exactly this problem.  It creates virtual digital sync.   I’m now beginning to have second thoughts about my years of Avid-bashing.  You can only access this functionality when you call up the Aggregate via the “Audio MIDI” utility in OSX (the preferences audio pane won’t do it).  I clocked both devices to the Mac internal D/A output by engaging “drift correction”.  Fortunately, this fixed the issue -- and kudos to SMAART for allowing the Aggregate choice as input.

Here are the settings that allowed Avid to fix the sync problems going into SMAART.

Finally I am up and running with a legitimate mic compare TF.  I can work around the polarity problem and now concentrate on discovering just how flat the UMIK is.   BTW, it’s not.  I ran all my TF measurements with 1/24 octave smoothing and it’s rough.  From 2k to 8k there are multiple resonant peaks – about 16 of them – upwards of +2.5dB.   My best guess is that this is the resonance of the housing or a problem with the grill. Whatever is the cause, it’s not good for a measurement mic – but it does have a tolerance of about +/- 3dB and that’s acceptable deviation and common in many popular recording microphones.

Here is the native frequency response on the UMIK-1

I imported the correction curve provided by MiniDSP into SMAART and ran another measurement.  It made the response a bit better – but still not great.  MiniDSP claims corrected tolerance to be +/- 1dB and my measurements confirm this.

I then decided to make my own correction curve. A correction curve is a comma delimited text file of frequency in one column and deviation in the other. SMAART is also able to export this data, which you can then paste into Excel and export as a file.

Watch this video to see the export and creation process for my correction curve. You can download a high-res version of this video here.

The result of the correction curve was quite flat. 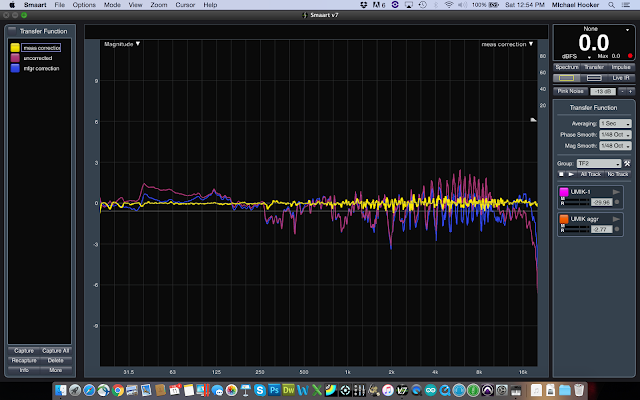 With a reasonable correction curve, the UMIK-1 can be used as a reference mic in non-critical applications.  Impulse response (delay timing) and quick system conformity tests should be just fine with this mic.  Because I already had the JBL 4328 set up, I decided to run a final comparison by measuring an actual TF of the loudspeaker with each mic.  The results are shown below. 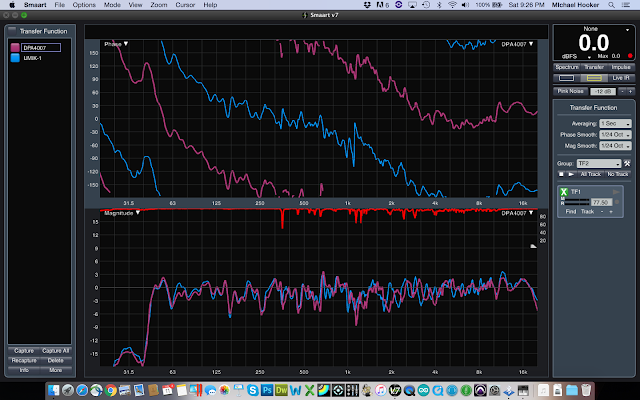 It’s not bad.  Some of the HF shift is likely due to the mics being about 2” apart with diffractive reflections stemming from being so close to the JBL waveguide.

SOME OTHER THINGS TO NOTE

Calling this mic omnidirectional is a stretch. It’s really a “generously wide” cardioid.  It exhibits significant HF shading at 90 degrees – so much so that the mfgr. also provides a 90-degree correction curve.  You can also adjust the gain of this mic via the MacOS “Audio MIDI” control panel.  However, I could not get the sample rate to change even though MiniDSP claims it is both 44.1 and 48 – the dropdown doesn’t work in OS 10.11.

What sells me on this mic is the convenience it provides at a very low price point.  It suffers from some bad engineering and a substandard correction curve, but it travels very easily and costs about 75% less than a decent entry-level (no correction needed) analog measurement mic.  If you can borrow an excellent mic from which to create your own correction curve, you have the means to correct for sample rate drift, and you don’t mind seeing your phase trace 180 degrees off, this is an acceptable device.  If you need it to work right out of the box, I would stay clear.