Did you know that the Tony Awards were named after a woman named Antoinette "Tony" Perry?

On September 12th, I was honored to attend the annual American Theatre Wing Gala in New York City. The theme was celebrating the incredible legacy of Antoinette Perry by uplifting the contribution of women to American theatre. The make-up of the production team, performers, Honorary Chairs, and musicians were in harmony with this purpose.
I was invited as the guest of Cricket Myers who acted as one of the two Honorary Chairs for Sound Design. The second Sound Design pair was Palmer Hefferan joined by Bailey Trierweiler.
This occasion was an exciting opportunity to meet and network with theatre professionals, to consider the progress each generation of women has made in our field, and to converse with donors who were enthusiastic about meeting the artists behind the art.
Looking back at this experience, the most memorable portion of the night was jumping with joy when I noticed who was sitting behind the console: sound designer Joanna Lynne Staub and audio engineer Adrianna Brannon.
We often hear today, "If you can't see it, you can't be it." This resonated with me at this event. To be in the combined presence of Palmer, Joanna, Adrianna, and Cricket - four incredible female-identifying theatre artists I deeply look up to - was not only delightful but encouraging.
Attending this event was a powerful reminder that those of us who have traditionally been overlooked, marginalized, and undervalued have immense power together. We all have the capacity to thrive, learn, be a mentor, be a mentee, and stand with one another knowing we have more work ahead. 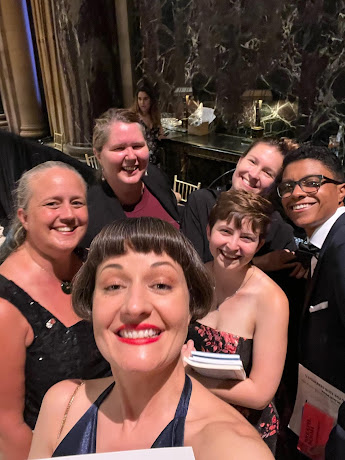