One of the best parts about coming back to school is our first quarter Trends in Modern Sound Design class.  This class (apart from being home to some of our favorite recurring projects... stay tuned) is often a great time for us to visit some really awesome places where sound trends are being made! In the past, we've visited Warner Brothers, L'Acoustics, QSC, and more!  This week, we woke up early and headed to Harman for a tour of their engineering and testing facilities.

We learned about compression driver technology, and JBL's take on how to make the drivers more efficient, with lower distortion.  Then we took a look at the testing facilities, where JBL was going through their notorious, rigorous 100-hour power test.  The room (behind 3 doors) required ear protection, because the SPL from their power test was incredible (it clipped the microphone on the crude SPL meters on our phones)!

The photo below is us in the power test room with Henry Goldansky, Director of Engineering for JBL. 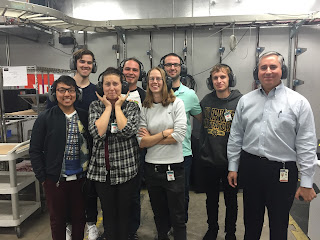 After a peek in the anechoic chambers (they have 4 of them!), we heard a great lecture from Dr. Sean Olive about subjective listening research.  We were honored to be featured on his slides as the "most trained" student ears. (Thanks Mike for your critical listening class!)  The slide below was one of my favorites -- it shows a correlation between training and cynicism.


Following the lecture, we were invited into the subjective listening room, where a hydraulic speaker mover hides behind a black grill cloth, and Harman's proprietary iPad app allowed us to choose our speaker preferences.  The speaker mover was a brilliant solution to ensure that each speaker was placed in the exact same place.  Interestingly, our preferences were all pretty similar to each other, and we were surprised with how accurately we could distinguish between the different bookshelf speakers in a blind test.  It became apparent that each of the speakers really did have a character of its own.


Thank you very much to our hosts at Harman/JBL: Paul Chavez, Ken Freeman, Henry Goldansky, and Dr. Sean Olive. We had a great time and learned a lot about subjective and objective testing!
My fellow students also wrote a quick note on their experience, after the jump.


Thank you for the awesome tour. I really enjoyed the tour and the in depth explanation of the design and function of the speakers you manufacture.
--Jacques Zwielich

Thank you to Ken, Paul, Henry, and Dr. Olive for giving such an enlightening tour! That was my first time in an anechoic chamber, let alone three, and it was wonderful and disorienting. As a sound person, I appreciate how much attention and time JBL/Harman gives to their products, specifically their rigorous testing methods. I also had a blast doing the blind listening test with my colleagues. It was exciting to hear about potential future products as well. Thanks again!
--Kelsi Halverson

Thank you for giving us a tour!  I especially enjoyed taking a look at the anechoic chambers as well as experiencing the rigorous testing that your speakers go through before entering the market.  The listening test was also a very enlightening.
--Andrea Allmond

I have never seen gear punished in the field the way you guys test those drivers, much less for 100 hours straight. I will never hesitate to push JBL/Harman gear, because I’ve seen first hand the absurd beating it can take.
--Ben Scheff

I had such a fun experience touring the JBL/Harman facilities, thank you so much for the tour! Getting to step into the stress testing chamber was both terrifying and exciting. The listening test was also very enlightening. Thanks again for everything.
--Garrett Hood

I appreciate the lengths you've gone through in researching the relationship between frequency response in headphones and speakers to listener preferences. This combined with the listening test gives us an insight to the lengths taken to create quality products.
-- Jordan Tani
Posted by UCI Sound Design at 12:47 PM