Constellation in After Troy 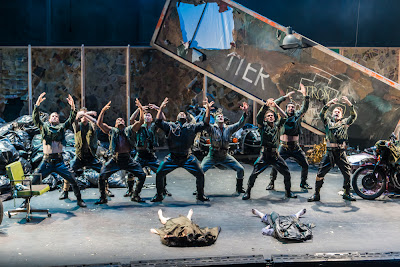 A musical number where I mixed the level of early reflections in this scene with the intensity of the music and vocals to make the scene feel like a musical.
My thesis show was After Troy, a large-scale play with musical numbers staged in UC-Irvine’s Claire Trevor Theatre.  The theatre is a 285- seat proscenium space with an unoccupied reverberation time of about 1 second.  This show presented me with many sound design challenges; primarily, a play performed in this space is very difficult to understand without vocal amplification and secondly, the show has several songs that portray madness or have a religious, sacred feeling that I wanted to heighten and enhance. Last year I used Constellation in my design for Waiting for Godot, primarily for reverberation effects, and fell in love with the flexibility of the system and the ability to have total control over the quality of the sound. For After Troy, I decided to use Constellation primarily for voice lift for the play’s dialogue but also to heighten certain moments with highly exaggerated reverberation effects.
To implement both needs, I used microphones over the stage and house and a system of speakers in the house. Steve Ellison helped me with this design and met with me to go over optimum microphone and speaker placement. He also came down to UCI to calibrate the system and help me get started. It was an invaluable learning experience to begin making Constellation cues with this system in place and the high level of understanding Steve left me with. During tech, I was able to further EQ the system to fit the show’s needs and adjust both early reflection cues and long reverberation cues to the emotional content of scenes, creating some truly beautiful moments. Overall, I created about 30 cues in CueStation that were triggered by sending MIDI commands to Matrix3 via QLab.
After Troy relied heavily on sound, with underscoring or ambience under almost the entire show and musical numbers sung by the entire cast. The director made the choice to amplify these songs using handheld microphones; he wanted this to be an obvious visual and aural convention that when you see an actor holding a microphone to their mouth that this was a musical number and that the actor’s voice was amplified. Therefore, I found myself using Constellation for three modes of operation: voice lift for dialogue, enhancing the background singers during songs using microphones, and special reverberation effects.

I think that using Constellation not only helped enhance the experience of the show for the audience but also helped the actors. In one instance, I created a cue that simulated the acoustics of a church for a poem sung in a religious style; this added a magical, holy atmosphere to the song that not only assisted the performance of the actress vocally but also emotionally as a character in the moment. I felt this was also true for songs of madness where the actors walked from the house to the stage; here I created cues with multiple reflections that made the music and vocals swim in dense reverberation throughout the space. Engulfing both the actor and the audience in this thick sound set the atmosphere for their insanity.
I found the use of Constellation to contribute greatly to the success of After Troy. The flexibility it allowed me was perfect for this show’s process where we were still adjusting staging and developing new cueing ideas during tech; I was able to provide a myriad of options in the moment that I otherwise could not have.
I am so grateful for the opportunity to have used Constellation in another show, for the support Meyer showed me, and the generous amount of time Steve spent helping me. I enjoyed the process of helping to design the system as much as I enjoyed creating the VRAS cues. 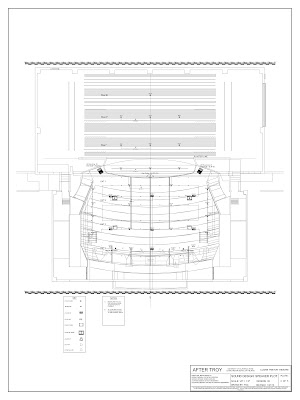 Groundplan of the Claire Trevor Theatre 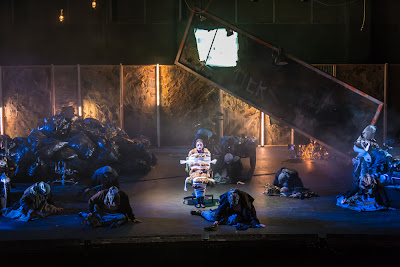 The preshow scene of the show during the audience’s entrance which used early reflections for subtle vocal reinforcement. 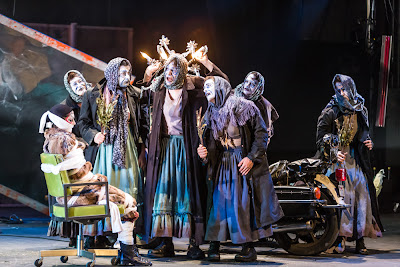 The male warriors disguised as women at the top of the show – a scene using early reflections for subtle vocal reinforcement. 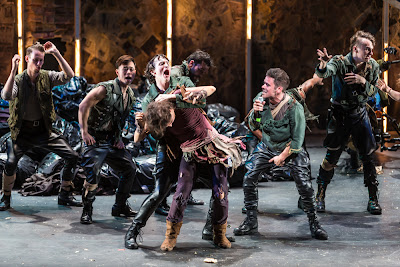 One of the first songs where the warriors abuse and taunt the women of Troy – a scene where I mixed the level of early reflections to balance with the reinforced vocals of the song. 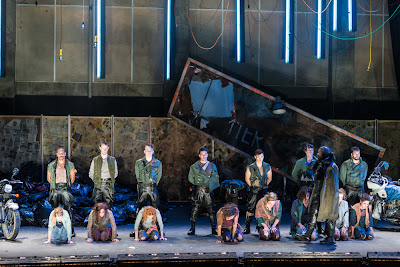 The one to be sacrificed to the gods is chosen – a scene using early reflections for subtle vocal reinforcement. 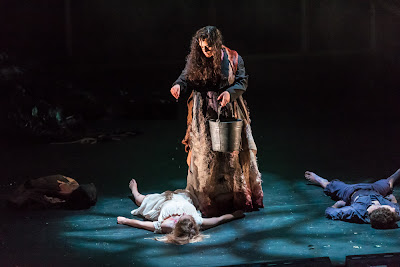 Hecuba performs a burial ritual for her children – a scene with a long reverberation effect to match the spiritual music and atmosphere.
Posted by Patricia Cardona at 7:49 PM