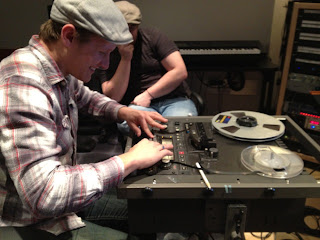 Yep... in Critical Listening class we actually learned all the alignment, setup, mechanics, operation and editing of reel-to-reel tape.   The format is pretty much headed towards the dead media list but it is such a joy to listen to all that it adds.

In this picture, Matt is experiencing the legitimate, old-school bliss of editing with his ears and not a silly waveform picture on a screen!  Everyone was blown away by just how good a 15i.p.s., 45-degree edit sounds - no pops or clicks - and an auto-magic crossfade. We also listened in great detail to tape compression/saturation and compared it to the Waves Kramer Master Tape plug-in -- of which we were all quite surprised as to just how similar it was to the real thing.