Ain’t Nothin’ But a Phase Thing 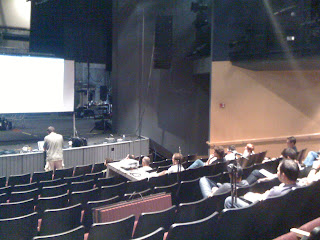 Last week, UCI hosted the Meyer Sound seminar on Fundamentals of System Design, Implementation & Optimization, led by Steve Bush. For all of us involved, this was an excellent opportunity to return to the basics of system design and ear training for live sound. Steve started at the ground level and took us through the process of critical decision-making, at a pace that allowed everyone in the room to stay on board.

The first day was spent reinforcing the basics. Steve set up combinations of UPJ arrays, UPJ & M1D subs, & M1D sub arrays, and demonstrated the results both aurally and visually in SIM. We did a lot of listening to comb filtering and polarity reversal with pink noise to get our ears acquainted with those sounds. Steve drilled us on wavelength and period recognition, asking questions like:

The underlying point of the exercise was to reinforce the importance of loudspeaker placement when designing systems, allowing us to speedily approximate the basic interaction between two speakers at any distance from each other. Just remember: 100hz is a mini cooper, 1kHz is a hoagie, and 10kHz is your pinkie finger.

Steve heavily reinforced the causes and effects of phase in all stages of system design. He set up a situation in which one source of pink noise was split and sent to a single speaker, and one feed was delayed an unknown amount. By examining a combination of the frequency and phase traces in SIM, we were able to see correlation between the frequency of the first dip in the combing and the 180º phase cancellation point. We would then double that frequency to determine the frequency of the next peak, then find the period of that peak to determine the delay between the two sources. For instance, if the dip is at 500, the peak would be at 1k — therefore, there would be 1 ms of delay present.
To demonstrate some of these effects, Steve set up a fairly typical tuning situation with a single UPJ and an M1D sub. Typically when tuning these speakers, you typically insert some form of high pass filter on the UPJ & low pass on the M1D sub. As Steve demonstrated, however, these filters introduce a shift in the phase curve of each cabinet — specifically, these 2nd order filters used within the Galileo 616 processor create a 90 degree phase shift at the cut frequency for each speaker. In other words, if the two filters are set at the same frequency, they create a 180º phase difference at this crossover point. The solution? Steve merely flipped the polarity on the sub, “turning the nulls into peaks and the peaks into nulls.” This shifted the cancellation point of the two speakers upwards in frequency, to a range that the subwoofer does not cover — in other words, there was no perceivable cancellation!

We also practiced arraying 2 UPJs, but in a different style than has been done here at UCI recently. Steve decided to treat one of the two cabinets as the main source, with the other acting as a kind of a fill that expands the width of coverage of the first. The measurement process went as follows:

1.  Capture the response of the main cabinet on-axis in SIM.
2.  Shift the captured trace down 6dB.
3.  Move the mic toward the coverage limit of the horn, until the live trace matches the -6dB one. This is the “-6dB point” of the horn.
4.  Mute the main speaker and bring in the fill.
5.  Adjust the placement of the fill until it matches the -6dB response of the main speaker. This means that the coverage of the speakers crossover at the -6dB point of each.
6.  Unmute the main speaker and tune the delay of the fill until the responses match.
7.  EQ the fill as necessary

Effectively, this creates the illusion of a single UPJ that has the extended coverage of an additional UPJ horn in one direction. Very cool, and definitely something we will want to experiment with.

One of the most interesting topics we covered was the phase response of a single loudspeaker within itself. Steve definitely blew a few minds in the room when he talked about the slow response of the woofer of a cabinet when compared to the tweeter. He also covered the use of all-pass filters in tuning. All pass filters provide no change in the frequency response of a signal, but merely introduce a delay in the signal. Steve explained that Meyer tunes the phase response of its cabinets by splitting the input signal into frequency ranges and inserting all-pass filters in such a way that the higher frequency ranges are delayed to arrive more in time with lower ranges  — effectively evening out the phase response of the cabinet. In the case of the UPJ that he used for the demonstration, the phase deviation is no more than 540º. Steve also mentioned that all-pass filters can be useful tools when matching the phase response of two speakers made by different manufacturers — but he also warned us that misuse of the all-pass filters can result in significant problems in other areas of tuning.
Steve touched on numerous methods of arraying subwoofers to allow directional control of the low frequencies. A sub-gradient array consists of two subs facing forward in a single-file line, with 3.5’ of separation. The rear sub is delayed to the front one, and then the polarity is reversed on the rear sub. This effectively creates strong cancellation in the rear, allowing the overall volume to be pushed without affecting those behind the array as much. An endfire array is a similar setup, except that the front sub is delayed to the back one, and there is no polarity flip. This creates constructive interference in the front, and destructive in the back. Endfire arrays can also consist of more than two subs in a line. Steve also showed examples of arrays-of-arrays with subs — for instance, a line of endfire arrays across the front of a stage.  He cautioned us on the use of these sub arrays, though, as even the smallest problem (like an XLR wired with reversed polarity) can completely destroy the effect.

One of the goals for the seminar was to practice our newfound skills on the rep system of the Claire Trevor Theater. The rep system includes: 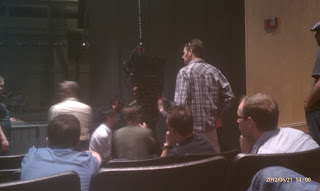 Steve decided to leave one of the arrays set up in the rep position, and experiment with the other one for comparison. We lowered the array to try new splay angles and heights and listened to how each set of boxes interacted with the room. It was a rare and unique opportunity to go through the steps of tuning a line array while Steve talked us through what we were hearing. 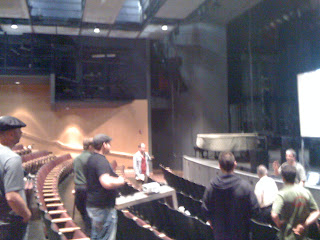 This seminar was an incredible experience for all of us at UCI. Steve was a wonderful teacher who gave some of the best-worded examples and definitions for fundamental concepts I have heard to date. He did a fantastic job of translating the results of SIM measurements into aural examples, and he explained everything in a manner that everyone, at every pace, could grasp. We really can’t wait to try out what we learned in the fall! Thank you to everyone involved and we hope to do this again soon!