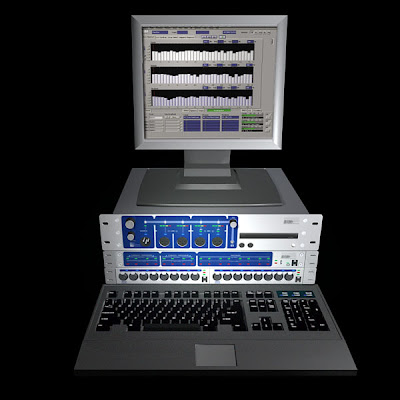 We started the day with Bob explaining how to use SIM3 to dissect an individual speaker, without knowing anything about the speaker beforehand.The 1st task was to find the crossover point between the HF and LF drivers. We moved the mic in front of the HF driver on a UPJ-1P that Meyer had supplied to use for demos, and then looked at the SIM3 screen. You could clearly see a change in the phase response right beneath 2kHz, at the point where the HF driver was handing the power over to the LF driver. What did the data sheet from Meyer say? 2kHz.


Was this such an easy thing to do with a non-Meyer speaker? Luckily Bob had thought of this question and had asked UCI if would provide a few other speakers for us to test. We pulled out an EAW JF-80 that was removed from a class room system because it was nearing the end of its service life (read: completely trashed), and asked Bob to give it a shot. Here is the result: 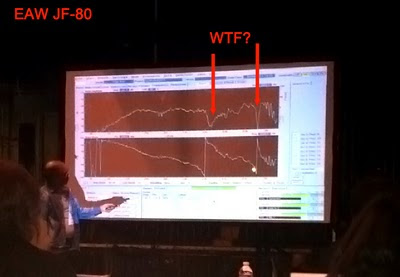 The first noticeable thing is the two huge dips at 2kHz and 12kHz. We can see a clear cross over point at 2kHz (the point where there is that huge dip). This speaker has definitely seen better days. This is what EAW says their speaker should look like: 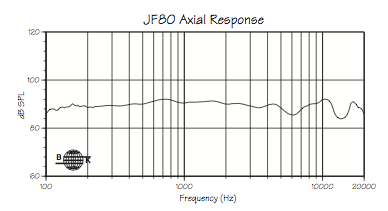 This also brings us to the dip at 12kHz, what is going on there? The original frequency response from EAW shows a slight drop at 12k but nothing like what the SIM3 shows. Bob thinks that the HF driver's polarity is probably reversed from the low drivers, but I think that the HF driver just needs to be replaced, especially knowing what this speaker has been through in its life. Either way this speaker needs have some love given to it, or just scrapped all together.
Since we also have a few JF60s, which are the baby brother to the JF80, I asked to test one of those as well to see if they would fare better. This was kind of a given, since I knew the horrible things that have been done to the JF80, but I wanted to see a successful dissection of a non-Meyer speaker. Here is the trace from the JF60: 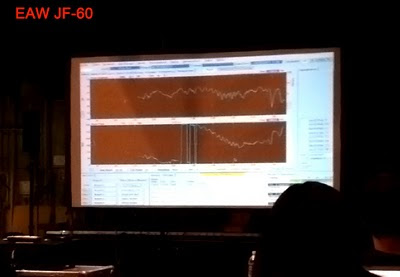 And here is what the frequency response is supposed to look like: 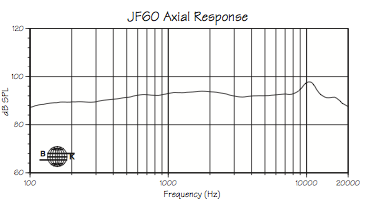 Notice that the frequency responses are similar (except in the very high end) and the phase response is relatively acceptable. Based on the phase slope we can see that the crossover point is somewhere between 2-3kHz, which is roughly what we would expect (I haven't been able to find a spec from EAW). Even Bob said he thinks that this is an agreeable speaker.

The rest of the day we spent focused on learning about frequency arrival time. We learned that speakers have an easier time moving the higher frequencies in their range because of their mass. You can see this in the JF60 above. It easy for that JF60 to put out 8kHz, but as it gets lower it gets more and more difficult. Around 2kHz the speaker is multiple wavelengths behind 8kHz. This makes it easy to see why we can look at a phase response and determine where a crossover point is. We just have to look and see at what point the HF driver cannot put out the frequencies in time, and has to hand the work over to the LF driver. We can also use this data to create our own perfectly in-phase crossover, say between a subwoofer and full range speaker.

We also talked about how impulse response works. Bob showed us that the impulse graph has a higher/sharper peak for high frequencies and a lower but longer result for low frequencies. So if you are aligning a subwoofer to a full range system you need to look at the point that the low end enters your microphone, not just when the HF peak happens.

At this moment I realized why some people have said that both Bob's systems, and Meyer speakers sound "bright." It isn't that their speakers are bright, it is really that every frequency arrives at the listener in proper time, creating a phase-coherent sound system. I know that the systems I have tuned in the past has definitely not been phase coherent. I have aligned my subwoofer to the point where 8000kHz reaches the listener, and not where 100Hz does. So 100Hz from the subwoofer arrives a few ms before 100Hz arrives from the main system, making the entire system sound darker than it should.

Since I am sure that I am not the only person has created phase-incoherent systems before, in fact I would venture to say that most sound systems are phase-incoherent, I would propose that we, as designers and mixers, have been compensating by changing our source material to be brighter. Then when this source material gets transferred onto a phase coherent system it sounds totally different. I would propose then that Bob's systems are not bright at all, they are correct, and that most other sound systems are the ones that should be fixed.

Email ThisBlogThis!Share to TwitterShare to FacebookShare to Pinterest
Labels: SIM