This past weekend, UCI Sound traveled together to Las Vegas to see Cirque du Soleil's Love. Most of us had never seen this show, but the department had visited several times over the past few years to meet with Jason Pritchard (Head of Audio) and Richard Dennison (Company Manager) for a look behind the scenes. From the extensive and highly-insightful tour from Jason to the spectacular show, we were all blown away at the quality of Cirque's work on and off the stage. We took a moment to note our individual reactions:

This was my first Cirque du Soleil show, so I entered without any expectations short of the glowing review I'd received from my peers. The show was, of course, a supernatural feat of theater, but I want to give special thanks to Jason for giving an incredibly comprehensive and informative tour, while being receptive and articulate with any questions we had. It's inspiring for me not only to see an operation as large as Love, but also to see the creative use of infrastructure to make it happen—bravo!

I learned so much about collaboration, gestural theater design, system design, etc. from watching Love. Jason's explanation of the system, in particular, was very clear—the fact that the time smear from the line array system is trumped by the clarity of the seat-mounted delay fills is very cool to me, and certainly something I will take advantage of in my own designs in the future. Overall an awesome experience—many thanks and I can't wait to come back and see another Cirque show!

Recently, I've been thinking a lot about redundant show systems:  How much of your gear do you duplicate?  Where do you combine your main and backup systems?  Should the main system and the backup system communicate with each other?  On the backstage tour of Love, Jason was kind enough to explain the backup systems they use, and how careful they need to be when changing out any piece of gear. When you're running a non-stop show like Love, 2 times a day, 6 days a week, it's crucial that the infrastructure stays up and running smoothly.  As such, the audio team has made it a priority to reduce risk at all links in the chain: computers, audio interfaces, control surfaces, backups of backups, etc.  It was great to see how thoroughly they've designed their setup, and it gave me a lot of ideas to try out as I put together a show computer rack of my own.

It was immediately obvious how much Jason and Richard loved their jobs and cared deeply about the show.  Their attention to detail, passion, and outreach sets a terrific example for theater artists everywhere; I aspire to being as enthusiastic and committed as they are.

My first year at UCI we did a themed entertainment class trip to Vegas and were lucky enough to tour Love. I remember being completely overwhelmed when Jason described the system for each piece of the "pie" of the theatre, and also confused about how each component was used and how it all came together. This time around I was able to not only hear the different systems being used throughout the show, but had a greater understanding of their purpose having integrated similar if not identical concepts into my shows since. Jason was very generous with his time with us and I was again impressed by his ability to talk about the history of show, where the state of audio for the show is now, and where it might go in the next few years.

Seeing Love was one of the greatest theatrical experiences of my life. I think often as theatre artists, we find ourselves critiquing the shows we watch. I am glad to say that every time I go to a Cirque show I am captivated by the show and I forget I’m in a theatre. I become immersed in the world that has been painstakingly created. It is a world that seems to have no limits or bounds.  There is a certain magic to Cirque shows that reminds me of why I chose life as a theatre artist.  Love was amazing and I am so thankful for the opportunity to learn from such great artists.

I would like to thank Jason Pritchard and Richard for providing us with such an amazing opportunity. It was great to see that all of the principles, techniques, and equipment we are learning applied on a massive scale. UCI has afforded us the opportunity to work directly with the exact same tools and techniques used in the show.  Jason’s tour was wonderful. I specifically enjoyed his thorough explanation of the massive system and his willingness to teach us about the show.  I loved that despite all of the technology in the show, the creative team stayed true to The Beatles music. Love was an amazing experience. Thanks to all involved.

I am extremely grateful to have spent time with Jason and Richard discussing the ins and outs of the magic behind Love.  This was a once in a lifetime opportunity.  I was blown away by the level of collaboration required and the number of hours spent in creating such a massive show.  It was great to have Jason walk us through his process. I was able to live vicariously through his tour, almost as if I were present during the creation of the sound system design and implementation. This day reignited within me a sense of passion for large-scale, state-of-the-art sound design. Love was one of the most brilliant productions I have ever seen in my life. There was so much to take in on so many levels, and I look forward to watching the show again as soon humanly possible. Thanks again to Jason and Richard for taking time out of their busy schedules to inspire me, and to the brilliant sound team for creating such a masterpiece.

Wow...where to start? It was another incredibly exciting, kid-in-a-candy-shop moment for anyone who loves sound.  Love was my fist Cirque show, and this was the first time I have ever experienced a show of this scale from behind the scenes. Jason was amazingly willing to take whatever time it took to provide carefully detailed answers to all our questions while on the tour.  My heart jumped with excitement watching the preshow checks for all the technical functions supporting this huge production.  I have not felt that magnitude of excitement about a given theater production in many years.  There was something about the sheer scale of the production; watching the stage oscillating, hundreds of lights flashing, and the thousands of speakers booming. Jason’s passion for the show was absolutely infectious. His love for sound, combined with the one-of-a-kind way that the sound was crafted/specialized for this production, was truly inspiring. The 90 min show was overwhelming in the best possible way from the very first a capella vocal—which stood out for its ability to heighten the emotion of the moment—using the most perfect reverb tail known to man. The other stand-out moment from the show was completely unrelated to sound: the spectacularly unexpected introduction to Lucie in the sky with diamonds nearly knocked me off my seat.  Before I saw the show, many people had told me that the sound was one of the best things they had ever heard. My gut reaction was not  to get my hopes up, but I was in no way disappointed; instead I was blown away. 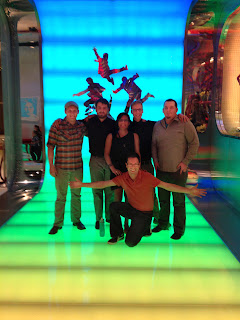 All 6 MFA's in the LOVE lobby before the tour. 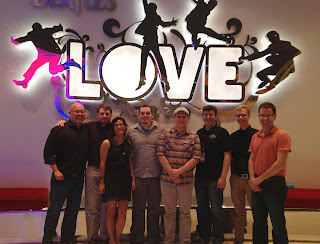 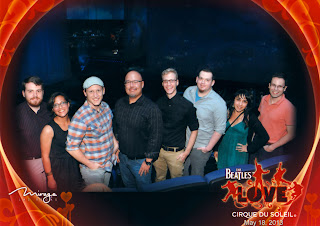 In the the LOVE theatre before the show.
Posted by UCI Sound Design at 1:39 PM