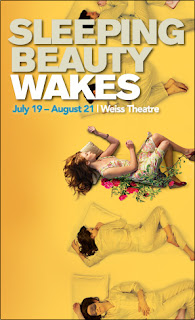 This past month, I was the Assistant Sound Designer of Sleeping Beauty Wakes, a new rock musical at La Jolla Playhouse, a Tony-Award Winning Theater. While there I had the privilege of working with Tony-Nominated Sound Designer, Leon Rothenberg. The sound system featured equipment we use here at UCI; Meyer UPQs and UPJs for the Main Left and Right, Meyer M1Ds for a line array center cluster. There was also a full range delay system of UPJs and M1D-Subs. Front Fills were also M1Ds.
While being in residence at La Jolla Playhouse, I had the opportunity to run SIM3 for two days as Leon, Associate Sound Designer, Dave Corsello (UCSD Sound Design Graduate) and myself tuned the sound system. When the actors came onstage for soundcheck they noticed how great things sounded. The Musical Director James Sampliner (of Broadway's Wedding Singer and Legally Blonde) noticed how clean the sound was too.
The show runs through August 21st, I've included the website to check out videos and music from the production.
Sleeping Beauty Wakes, La Jolla Playhouse
Posted by Jeff Polunas at 7:13 AM